The price of a memory is the memory of the sorrow it brings.
― Pittacus Lore, I Am Number Four

The scars that are left in a person’s soul after surviving a war, the ways a society tries to console and redeem itself, how the historical truth gets twisted, suited and tailored to different people’s needs: these are topics that Sora no Woto, beyond its flaws, managed to sing about elegantly. The sound of the sky carried and awakened memories…

War trauma: the ghosts of the past

In episode 7, we get a glimpse at Felicia’s past and her recollections of war. It’s the first thing we see when the episode starts. The memories are as clear as if they happened yesterday [1]. The cinematography is excellent and when Felicia’s gaze stumbles across her fellow soldiers’ dead bodies, the ‘camera’ trembles. She starts feeling dizzy, the terror obvious in her eyes; her world is falling apart, both metaphorically and literally, drastically changing from one minute to another.

Later in the episode, the flashbacks continue: she walks aimlessly, her mind blank, when the debris and the road cave in and she ends up underground with a skeleton as a company. The situation starts sinking in; Felicia questions her reason for living, and wonders why she was the only one who survived. These dark thoughts pull her deeper in despair to the point that her guilt of being still alive morphs into an apparition and an imaginary dialogue with the skeleton. It’s her survival instinct and loneliness that make her respond to the calls of the princess who came to her rescue.

In the present, Felicia’s memories keep coming back against her will, whenever she falls asleep or spaces out. We see her having hallucinations, like when the image of a soldier appears in the fortress’ yard; she smiles bitterly, because she’s aware that her eyes and spirit play pranks on herself.

This is a pretty accurate reflection of reality. Trauma is an event that pushes the individual to its limits, destabilizes its life, and in its first phase the individual feels unable to handle and process it. Denying what happened results in ‘eternal mourning’: the trauma resurfaces in miscellaneous forms at the slightest trigger. In Felicia’s case it was the public commemoration, a day which wields enormous emotional power (I’ll touch the topic of the ceremony later). However, Felicia seems to have worked through her past, since her reactions aren’t panic-stricken. She also appears to have found a meaning for her life. Mourning in such conditions is a long-winding process, after all. And we aren’t given enough of their time to know what progress the characters have made through the years.

On the other hand, Nöel freezes, starts shaking, and goes berserk once she encounters the Roman soldier and hears her old title and commander mentioned. The cinematography is once again masterfully executed: a deranged Nöel is shown behind some sort of metal railings—she is held captive by her fear and memories.

Nöel’s case (episodes 11-12) isn’t only there to reconfirm how vile war is. Her angle is different: while Felicia is portrayed as a victim, the sole survivor of her troop and at least an adolescent, Nöel is shown as an exploited child genius who witnesses the death of people by the war machines she helped rebuild. Thus we are shown both the suffering of the perpetrator and the exploitation of children in the war.

Her trauma is deep not only due to the tender age at which she was exposed to war’s cruelties, but also from the sudden change between the protected world of the laboratory where she got praised and the raw reality. The military’s image as a highly organized and efficient unit juxtaposes with the reality of war as chaotic, terrifying, and anything but meticulously executed [2]. It’s a shame that we weren’t presented with the experience of other soldiers who dealt with hand-in-hand combat; then we could understand better how complex the human soul is and the devastation war wreaks upon on it.

Public commemoration: appeasing the living and the dead

‘Festa du Lumieres’ in Helvetia is in fact Tōrō nagashi. Tōrō nagashi is a Japanese ceremony in which participants float paper lanterns. This is primarily done on the last evening of the Bon Festival, based on the belief that this guides the spirits of the departed back to the other world. It is also believed that humans come from water, so the lanterns represent their bodies returning to water. [3]

The deep emotional and physical wounding caused by acts of violence is devastating to the individual identity and,by extension, to group identity.  Prayers, rituals and symbols can be used to heal or transform the trauma. People want to be bonded in emotional and spiritual ways—to give and receive love.  ‘Festa du Lumieres’ is an opportunity to express grief. It helps survivors to see the traumatic events in a new perspective, to build hope and a healthy self-identity, and to be able to effectively cope in their communities. It also makes people feel calmer and relieved because they are still connected and can do something good for people who have died and were special for them. [4]

The Helvetian version is narrated by Rio, who impersonates a Flame Maiden in the Water-Dousing Festival, while the Roman version is told by the nun who heard it from the Roman soldier. In both cases we can talk about remembrance through communicative memories that passed from generation to generation, and about anonymization of the trauma.

Trauma creates a huge void in the way a society perceives itself. Besides ceremonies, history or, in this case, legend contributes to the (re)creation of identity, but not without distortions of the truth.  Be it the collective memory that got warped or the state that manipulated the narrative, the Flame Maiden legend and its two versions reflect the wishes and self-image of each country.

If we want to find out what really happened, we should take both versions into account, like Herodotus’ first attempts at writing history. For some reason, in this dystopian future the science of history seems to have been lost, and remembrance of the past reverted to oral traditions. So, we’ll work with many assumptions and our logic as guidance.

Assuming that the Romans saw themselves as punishers led by God, we can believe they were the ones who initiated a war or avenging a past lost war and its victims. The Helvetian version about the demon inside the city might be interpreted as the Helvetians co-existing initially with Romans and treating the latter with racism or as the fear of the enemy who was of different skin color.

The angel and the demon were both based on a dinosaur fossil, which each side assigned different values. In both versions the giant spider alludes to the tanks and the golden horn signifies a peace treaty. This much is clear. But what about the rest of the story? If we consider the Roman version closer to the truth, then we can claim that the Helvetians wanted to cover up what they considered treason from the women in their town (the fact they helped the enemy by providing medical help). They take metaphorical revenge by turning them into victims, but since they also need a reconfirmation of the community’s worth, they make the girls in their version suffer willingly while the villagers helped extinguish the fire by dousing them every day (this could hint at torture procedures, too).

What is not so certain is the duration of the hostilities. The Helvetian version gives the impression that it was a hard fought war and that it lasted a long time. The Roman version presents the events happening over a shorter time span. It’d be only natural for the Helvetians to emphasize the hardships and duration, while the Romans, who considered themselves god-sent, would only embarrass themselves if they admitted they weren’t victorious after a long war. It’s not coincidental that it’s the angel who gave the maidens the golden horn in the Roman version: the enemy declared peace only because their side provided the solution.

Memory is a tricky thing. We get scared in life, so we wish to forget. Sometimes we can’t. Sometimes we cover the bad memories with gold leaves and paint a new picture for us…

[1] In order to create a memory, the brain releases chemicals “that etch these events into its memory bank with special codes”. However, when one experiences a traumatic event, the memory becomes vivid because the context surrounding the event is so significantly different from anything the victim has ever experienced before. It seems, then, that during a traumatic event, our senses are heightened – this may be due to the fight-or-flight response that readies us for action. Since we sense (or know) that something is amiss, our brain releases more chemicals that allow us to be more alert; this in turn may be the mechanism that helps us to remember traumatic events so well.

[2] as well as the above come from http://serendip.brynmawr.edu/bb/neuro/neuro03/web2/shabelow.html 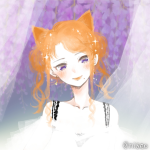 With the shiftness of the world’s naughtiest tail, the innocence of youthful eyes and the smartness of a fox’s brain, she travels the world of ideas and articles along with her companion. Through their long journey, they have carried a great variety of spices (anime, manga, music, books…) to make their days and nights as tasteful as possible. You can find their diairies at kitsunetoneko.blogspot.com. She writes under the pen name Foxy Lady there and usually bears the nickname ayame in the wordpress-sphere.

2 thoughts on “Memory and Oblivion in Sora no Woto”