Is virginity a character flaw?

Traditionally in Japan young girls were assumed to be maidens, to the point where the terms were at times used interchangeably. Perhaps in today’s sex-positive, metropolitan world, it’s assumed that youngsters of both genders will fool around.

In that light, B gata H kei appears to be something of a deconstruction of high schoolers’ attitudes towards sex. The details strain credulity (aiming for 100 casual sex partners in high school? Really?) but the overall idea that impressionable and insecure teens feel obligated to put on airs is dead on. It’s interesting that so much of the main character’s insecurities rest on the gross physical details of her anatomy, but what better symbol for the teenaged preoccupation with sex?

It’s also interesting that there has been no feminist backlash against this. While Equality Now campaigned against erotic games such as Rapelay for objectifying women and supposedly setting bad examples that would hurt their self-esteem, B gata H kei is arguably far more damaging to that self-esteem, as on the surface it presents justification for sexual objectification coming from women and not men. Where is your sense of self worth as an individual when everything rides on your ability to find partners for casual sex? In the world of B gata H kei, some women aren’t objectified by men so much as they consider themselves sex objects first and foremost, rather than people. 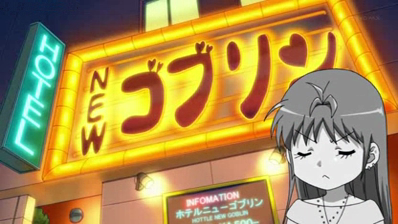 The first sexual encounter Yamada envisions takes place not in a home or car, but a love hotel. In her imagination, it ends badly, with the boy disdaining her inexperience and implying that she is clearly lacking as a woman. Her desire to avoid this mortifying outcome leads her to reject the real boy’s advances flat-out. In America, we might expect this kind of terrified embarrassment from a forty-year-old virgin, but Yamada is fifteen. The way she justifies her rejection is telling as well: rather than insist on her personal right to like or not like someone, she insists that she can do better and deserves “a good man.”  It’s as if her own tastes aren’t supposed to enter into it.

Having rejected the boy, she then does a 180 and decides to chase a random guy she sees at the bookstore. This isn’t done with anything approaching timidity or modesty, mind you: she all but forces herself on him, and confusion is the result. Why the divide? It makes no sense until one recalls that in Japan, even men who love to chase women often hate aggressive females, dubbed “carnivore women.” Perhaps the intended message is that this attitude is manifestly nonsensical, whether employed by salarymen or by this fictional high school girl – what does it matter who initiates as long as both parties are interested?

As a commentary on – and parody of – immature attitudes towards sex, the premise of B gata H kei works. That premise, however, does not seem to justify an entire season’s worth of episodes. Only time will tell if B gata H kei keeps itself interesting by tackling other social issues, or if it beats a dead horse.