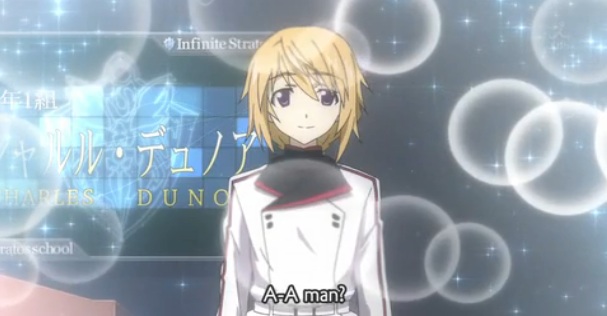 I wish I could look like him (her?) in the mirror…

Ichika was the only guy at an all girls school. That’s why I resented this anime, IS: Infinite Stratos. But now, from France arrives a new transfer student, Charles Dunoa, a son of the CEO of Dunoa Company that is part of the military industrial complex. And he’s Blond Hideyoshi! And girls all gone crazy over him.

How I wish I was girly-looking like Charles… My self-loathing is partly due to too manly looking, so I can’t crossplay. So, I can’t look at myself in the mirror like that dwarf from Oscar Wilde’s fairy tale, The Birthday Of The Infanta. In turn, Charles has a petite girl figure like Bodhisattva statues. So, girls want to protect him, take care of him. Charly’s surely invoking mother nature! Yeah, these girls are cadets striving to be pilots, so of course military girls go crazy over a cute girly boy.

Oh my Gosh! Look at these eyes! They chit-chat about you, gossip about you! They’re checking you out at once! All attention is on you! To this scene, I was screaming at the top of my lungs, “Oh, my God!” Ah, retrospectively, I’ve never been looked like this. All I got was the eyes of contempt like a Jew in the Nazi era. Their cruelty made me what I’m right now; Otaku/Hikikomori.

OMG! Surrounded by girls! How much I want this! That’s what I need. Attention, approval, appraisal (Triple A) from girls!

But the fact is… Charly is a son of big firm’s CEO. How unfortunate that even these highly assertive cadet girls are gold-diggers, the saddest trait of unevolved girls. How sad their bravery is just physical, their mind hasn’t evolved a bit. They still go for men with higher socioeconomic status. Yes, men with a lot of money…that’s what they want. Sounds like Pink Floyd’s Money.

I thought God was just, He was going to punish success. As an immigrant, I’ve long been struggling to make ends meet, enduring hard labor while involuntarily delaying romantic gratification. Lower productivity with lower credit scores are proportional to near-zero or total lack of score with girls. These dudes, Charly and Ichika, they get enormous amount of skinship, while the best I can get is handshake… How can that be… Aren’t we all created equal?

I was hoping the world would be fair, God would correct the wrong. I often heard pastors and bishops advocating that Platonic Love was true love, and fornication was sin. At least, I wasn’t committing sin, and I hoped these studs constantly getting laid would be punished like Makoto. So, I clang to a sense of superiority that I was spiritually better than them sinners. My God had to be their God too, since the majority of dudes I resented came from Judeo-Christian background, so if God was just, something bad would happen to them.

Then, three years ago, an extraordinary fellow suddenly appeared out of nowhere. I’d never seen anything like it. I sensed providence; finally God answered our prayer by sending us the messiah. Our society is Winner-take-all. The winners have been taking all the girls we fancy. The rich dads are the gravest sinners of all. So, Winner-take-all is actually Sinner-take-all. So, this Robin Hood would impose “sin” tax on the sinners, and redistribute their success to me. Once free from financial struggle, who would refuse my skinship request? When he was talking to Joe, “It’s not that I wanna punish your success,” my heart heard him saying loud and clear, “But God will, and I’m going to do God’s work!” And I applauded him for that.

But nothing has changed. 3-D remains the same. Thus, I’ve become atheist again, losing faith in both politics and religion. Maybe someday 3-D might change, but probably not in my life time, or even in my life time, not while I’m still young, so the only girls I seek are in 2-D…

Who cares about politics and religion if I can enjoy romantic pleasure…?

Well, the good news is Ichika is at least getting punished for his success.

Looks delicious, but when he eats…

English food after all. That’s his punishment. So, my anger has subdued a bit. Now I feel a little better. Therefore, temporally this gnome, an otaku, can face himself in the mirror…

A refugee from Japan. Live in NAFTA. Get hooked on Moe. Moe is opium? Twitter: @MonsieurLamoe