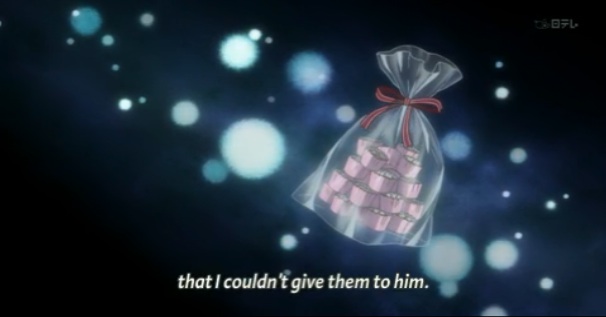 Kimi ni todoke 2nd Season, the first episode, Sawako fails to give honmei choco to Kazehaya. No White Day for her. Only Black Day… She’s totally dejected, remorseful, blaming herself for not being able to do so, and assuming that Kazehaya would never receive honmei choco. And she even thinks she isn’t worthy. And what’s worse, actually Sawako and Kazehaya like each other, but they’re the only one don’t know about it! People with romantic-antenna, I should say “romantic psychic,” already figured that out like Yano-chin and Kent. I mean, even if you aren’t psychic, it’s quite obvious!

Kazehaya is “love-shy.” He is an energetic extrovert, but when comes down to romance, he becomes utterly shy. And he’s dense too. While Sawako is not only love-shy, but also shy in every situation. She’s quiet, nervous, eccentric, pliable due to hypersensitivity, yet innocently honest, kind, caring, and fond of nature, like taking care of school garden. Her shyness used to make her unsociable. But, with a little help from her friends, now she can even try to give honmei choco. How cute!

Ah, choco…, I never received honmei choco in my life. Very different from John Lennon’s “In My Life.” Yet, once upon a time, I briefly received giri choco, what, like in elementary school…? Plus, I never received any choco in high school, the best and most important time for romance! And no obento either, what a hapless life! But watching Sawako, now I start to think that some girls actually had a crush on me. Yeah, that’s right, they were too shy to give me choco. That’s it! Or is that wishful thinking? Well, but the fact that not receiving any choco made me gloomy, and finally led me to become an immigrant in the United States. Wishful thinking could’ve prevented me from crossing the Pacific. If only Kimi Ni Todoke was aired when I was still in high school…

That’s why I was elated over Sae-chan from Amagami giving obento. Obento would’ve stopped me from coming to the states! And honmei choco también! In high school, not even one giri choco… How could a society be that cruel… Yes, that’s how 3-D girls were. On top of that, no skinship… Ah, if only there was a girl like Sawako… Yet, there was no way I could change the society, since it always stays the same, unless Kurofune or Gen. Douglas MacArthur, some huge external force, comes to Japan, the most immature democracy among the developed countries. So I had to leave the land of oppression, and come to the land of free.

For sure Sawako is a good match for me. I’m also hypersensitive to rejection, since I’ve been rejected countless, like the All-Japanese Rejects. That should be the name of my band. In my childhood, I had an inferior body, smaller than the average of my age group, so I got picked on, going through demonic male violence. Clain just started experiencing the cruelty of 3-D, but for me, I was already christened. I already knew 3-D was sh@tty. That made me hypersensitive, especially around men, and so did girls’ rejection in my adolescence. So, I came to America, but turned out to be worse. There were far too many machomen out there.

My sociophobia, and agoraphobia (fear of market), especially fear of interaction with the male population. I wish there were only girls like Yuri such as Marimite, Strawberry Panic, they don’t resort to violence though they may resort to verbal abuse. At least, not physically threatening like rascals in South Central, Juárez, Darfur, or a recent chaos in Egypt. I know some girls hold black belts in martial arts, but they aren’t prone to violence like men. So I better keep distance from dudes, since I can never trust them. I don’t know when they gonna suddenly burst into violence, especially in a bar setting, where TV is showing ESPN. And these aggressive dudes with the brain full of adrenaline and testosterone are picking up all the girls like trophies in hunting. And these girls fall under their hideous biceps, lured by the shinny objects and gas-guzzlers. Thus, perpetuating machismo under which women don’t have a chance to lead.

So, there’s no chance getting choco in America. But, what’s Valentine’s gift anyway? It’s just a business strategy to make money out of romance. Yes, romantic capitalism, which is 3-D, the market. But, at least in Japan, Valentine’s Day is when girls take the initiative in romance. That’s a positive thing, a little closer to gender equality. In America, girls let men do all the work, they never pay one single dime, never going dutch. So, Sawako is far more courageous than girls at Uncle Sam’s Club.

Ahh, Sawako’s hurt. I really feel sorry… The scene she prepares choco in the kitchen, ahhhhhh! Just adorable! This girl is really cute! I want to hug her! But I can’t, since she’s in 2-D, a fantasy world. So, the only answer is virtual skinship…by listening to this soothing French accordion, its mood perfectly matches her personality and mine. Ah, I wish I could grow up in France, one of the most romantic countries on earth… Ah, how I wish I had a girl like Sawako. So, Valentine Choco would never have been a sh@tty custom!

A refugee from Japan. Live in NAFTA. Get hooked on Moe. Moe is opium? Twitter: @MonsieurLamoe