They were being driven to a prison, through no fault of their own, in all probability for life. In comparison, how much easier it would be to walk to the gallows than to this tomb of living horrors!

Finally strapped myself in, and took a nice deep dive into the hellish wonders of Durarara! And for this reviewer, it can be shared with no uncertain issue, that it is easily one of the most consistently interesting series this year. As much as I’d love to spend the whole of this post to merely puncture myself to incessantly gush at any who’ll gawk about my positive feelings about the series, it only felt right to at first give a smal glimpse into what it is precisely that keeps me transfixed, drawing me further into its surreal comic nightmare.

Taking a cue from storytelling techniques employed in anime works such as Baccano!(which original scribe, Ryohgo Narita also worked on), Durarara is a kaleidoscopic tour through the hypercultural Tokyo hub of Ikebukuro, where young Mikado Ryugamine has just moved from the countryside to attend high school with energetic childhood pal Masaomi Kida. If our newcomer’s first tour of the neon-strafed streets is any indicator of things to come, we are in for a carnival of danger and weirdness as cultures and circumstance clash in a prelude to sinister events brewing around the edges of the shows multiple storylines involving the district’s many unique, and often desperate denizens including runaways, street gangs, violent bartenders, and even average otaku caught in the maelstrom.

And yet the sinister has even greater surprises in store, as a local legend rides the night, taking out street toughs with supernatural abandon. Everyone seems to know about the black-clad, helmet-wearing avenger/courier Dotachin. And the eeriest rumour, it doesn’t even seem to be human!

And this is where one of the first major points of interest come to pass for me, the show’s colorful ensemble has a vibrant feel that juggles both the very believable, and the willfully exaggerated in a manner befitting the best of Takashi Miike‘s wildest urban hallucinations. It’s never so outlandish as to not be believable in any respect. In fact, much of inner Tokyo is akin to a hodgepodge of cultures and ideas that there is an unlimited barrage of stories that could come out of this setting alone. The collision of bright lights, and urban decay are something of a major selling point to me as I can easily see friends of mine unknowingly rubbing shoulder past many of this series’ characters. All carrying the extra weight of their respective social ennui, and ready to burst at a moment’s notice. This is an attempt to tell modern day fairy tale encased in a nebula of urban sprawl.
So yes, at its best, Durarara! is a refreshing and energetic ensemble piece that thrives off of some pretty effective choices. One of which is the very tricky western drama format not unlike Twin Peaks, The X-Files, or even LOST, where the mundane is carefully immersed with the hyperreal, and even given an injection of old fashioned horror. And very much like the last mentioned series, none of this would even work if not for some very clever, character driven writing that isn’t afraid to lead viewers into risk-taking hard lefts. The series continues to lead us into false feelings of safety, only to peel yet more layers, leaving us with more to consider about our viewer surrogates than initially invested.

So as we settle into the madness as best as one can, and inevitably get hint of the machinations controlling Ikebukuro’s underbelly, it is done so by introducing the heavy dispenser-throwing  bruiser, Shizuo Heiwajima, the mysterious social Mephistopheles, Orihara Izaya, not to mention the images of trendy girls in ganguro gear tapping away like panicky soldiers on their keitai wearing cartoony angel wings. It isn’t too tough to imagine the rising prices on a metropolis’ busy soul exchange rate. Angels and demons residing alongside the mortals, living as aimless chess pieces in varying states of social disconnect. 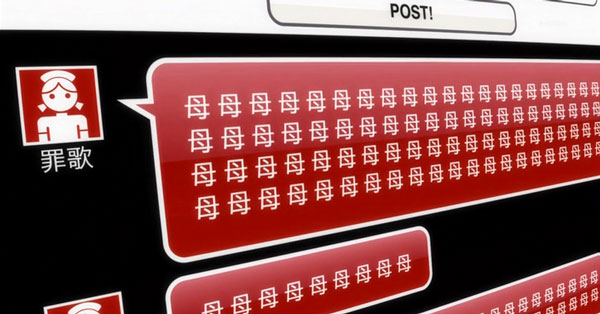 And from where we’ve reached, it seems as Ryugamine & Kida have slowly been slipping into the core conflict of the story as it becomes alarmingly clear that the beckoning of the city, with it’s allure & promise, offers so much and yet grants none. An instinctive will to use others in an environment that is meant to nurture so many dreams is a running theme throughout the series, and seems to be heading into some pretty interesting territory. And for those, wondering where a plot will surface, this is clearly not the type of series that adheres to any central plot so much as a means to experience the organic elements of the setting, and see what comes of these characters when the heat is brought to a slow boil. It’s a style decision that may not ring everyone’s bells, but is one that this particular writer sees as an open door to some enticing revelations.