Aya Hirano’s concert, held on the last day of Otakon 2012, was an excellent way for many to spend the last few hours of the convention. Aya Hirano is best known for her role as the singer of the opening and ending songs for The Melancholy of Haruhi Suzumiya, as well as voice acting anime characters such as Haruhi and Konata from The Melancholy of Haruhi Suzumiya and Lucky Star, respectively.

Scheduled from 12:30pm – 1:30pm (conveniently after most area hotels’ checkout time), the line for Aya Hirano’s concert extended from the entrance of the concert hall and continued outside the east side of the Baltimore Convention Center, an effort to minimize the line’s impact to traffic inside the convention that was mostly successful. Thanks to excellent line control by Otakon’s staff, the concert hall quickly and efficiently filled with Otakon attendees, nearly hitting the three-thousand person capacity of the concert hall.

The lights dimmed, the band strolled onto the stage, and… 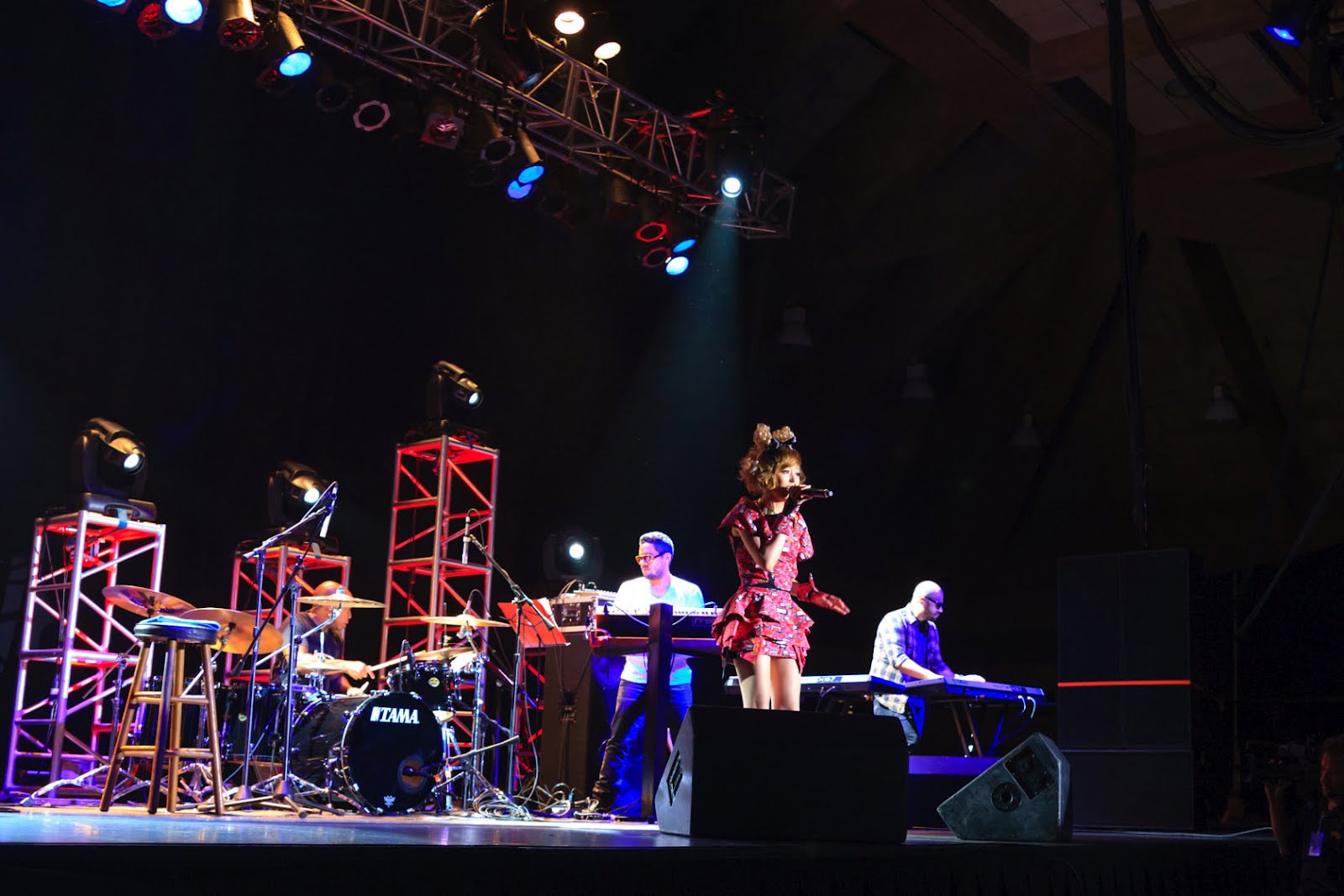 Aya Hirano stood before thousands of her American fans, singing “Riot Girl” from her debut album of the same name. Her second song, “Kiss Me,” was from her second album Speed☆Star. These songs were from 2008-2009, near the beginning of her career.

After singing the first two songs, Aya Hirano finally greeted her American fans to excited cheering and vigorous waving of glowsticks. The next set of songs were the only parts of the concert that press could photograph. So as Aya Hirano started performing these songs, I was madly taking pictures of Aya Hirano’s performance. 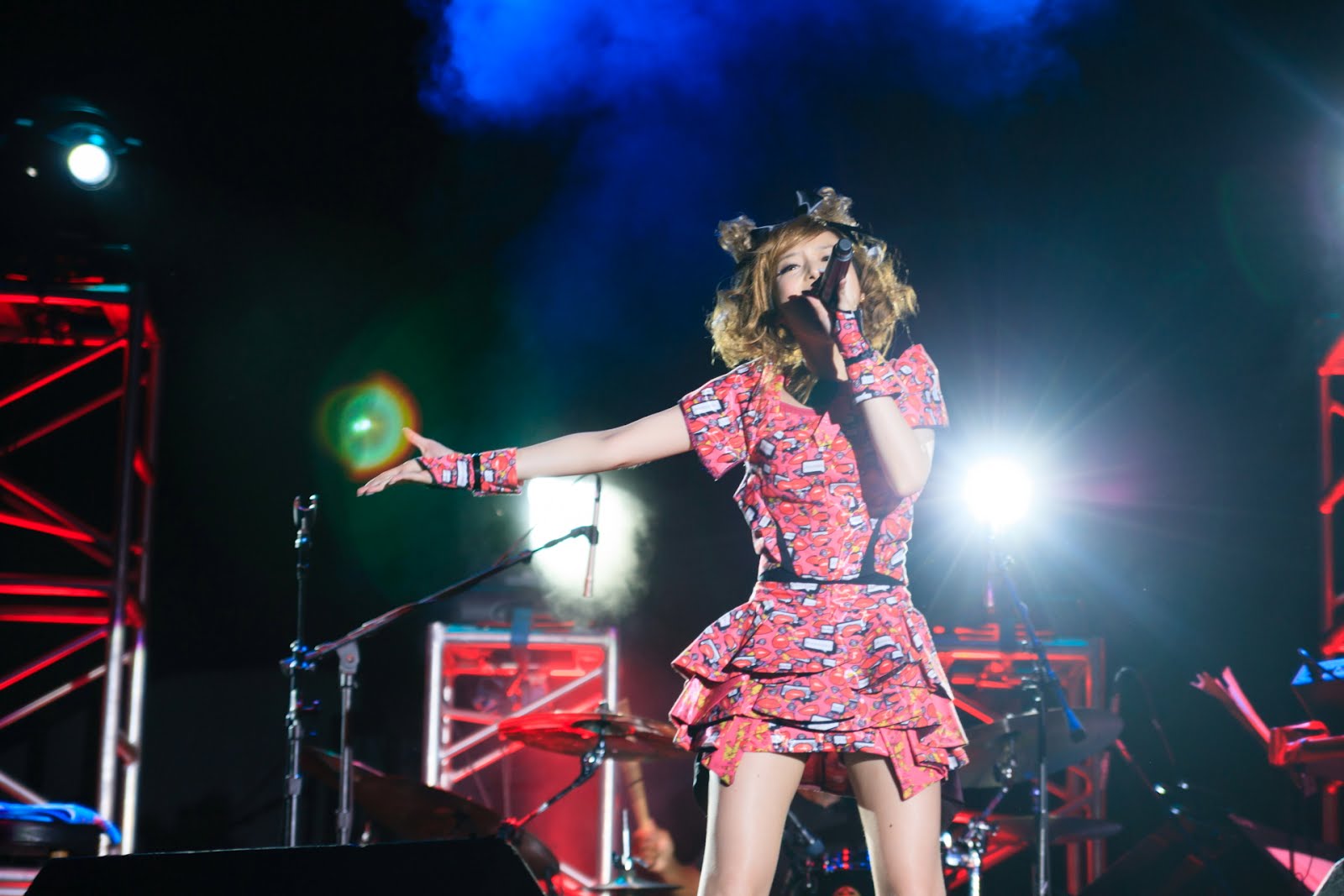 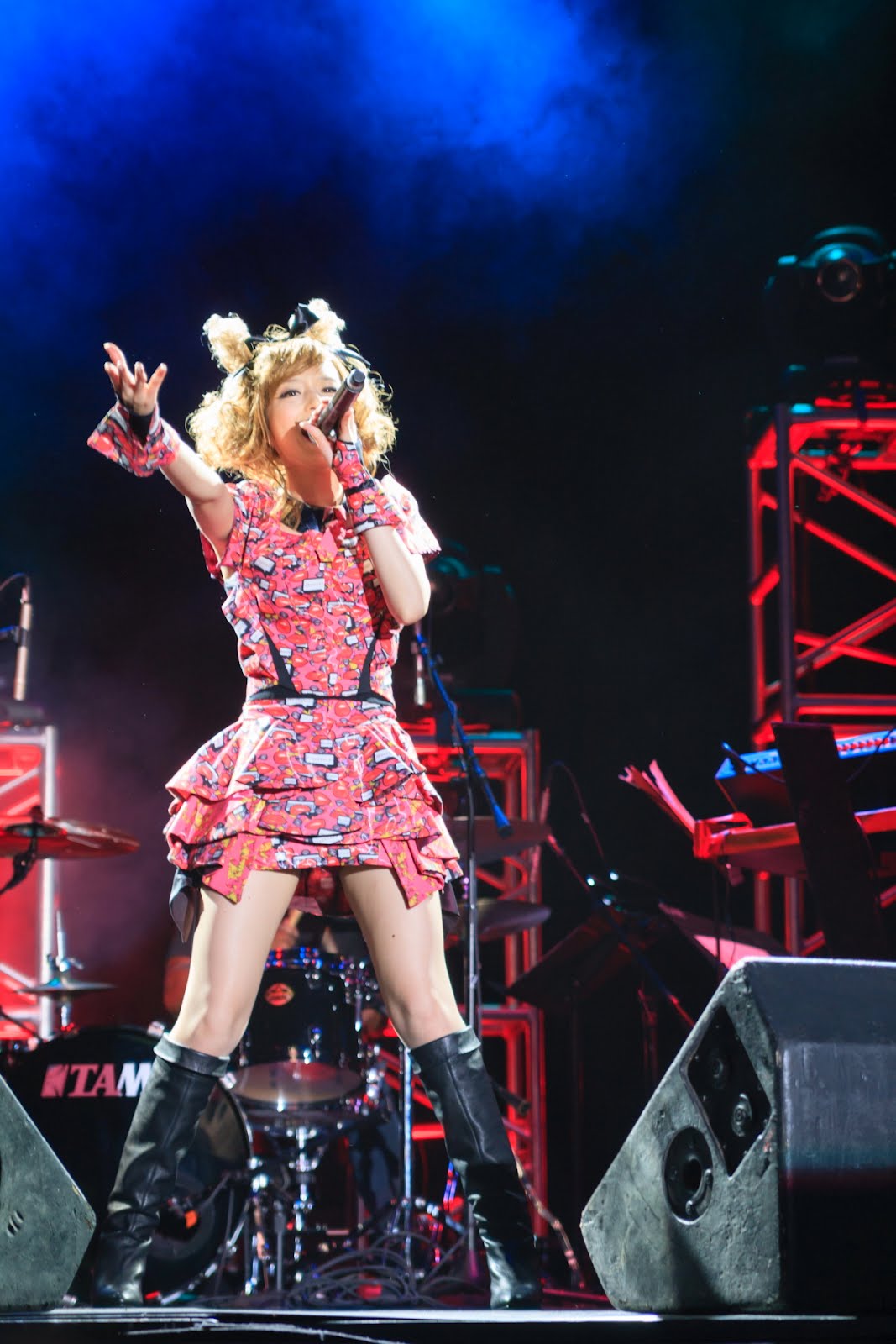 At this point, most fans of Aya Hirano who had only heard of her anime songs might not have recognized any of the songs just performed. Of course, she had just saved her most well known songs for last: “God Knows…,” “Lost My Music,” and “Super Driver.” These songs were used as insert songs for the first season of The Melancholy of Haruhi Suzumiya, and the opening to the show’s second season. 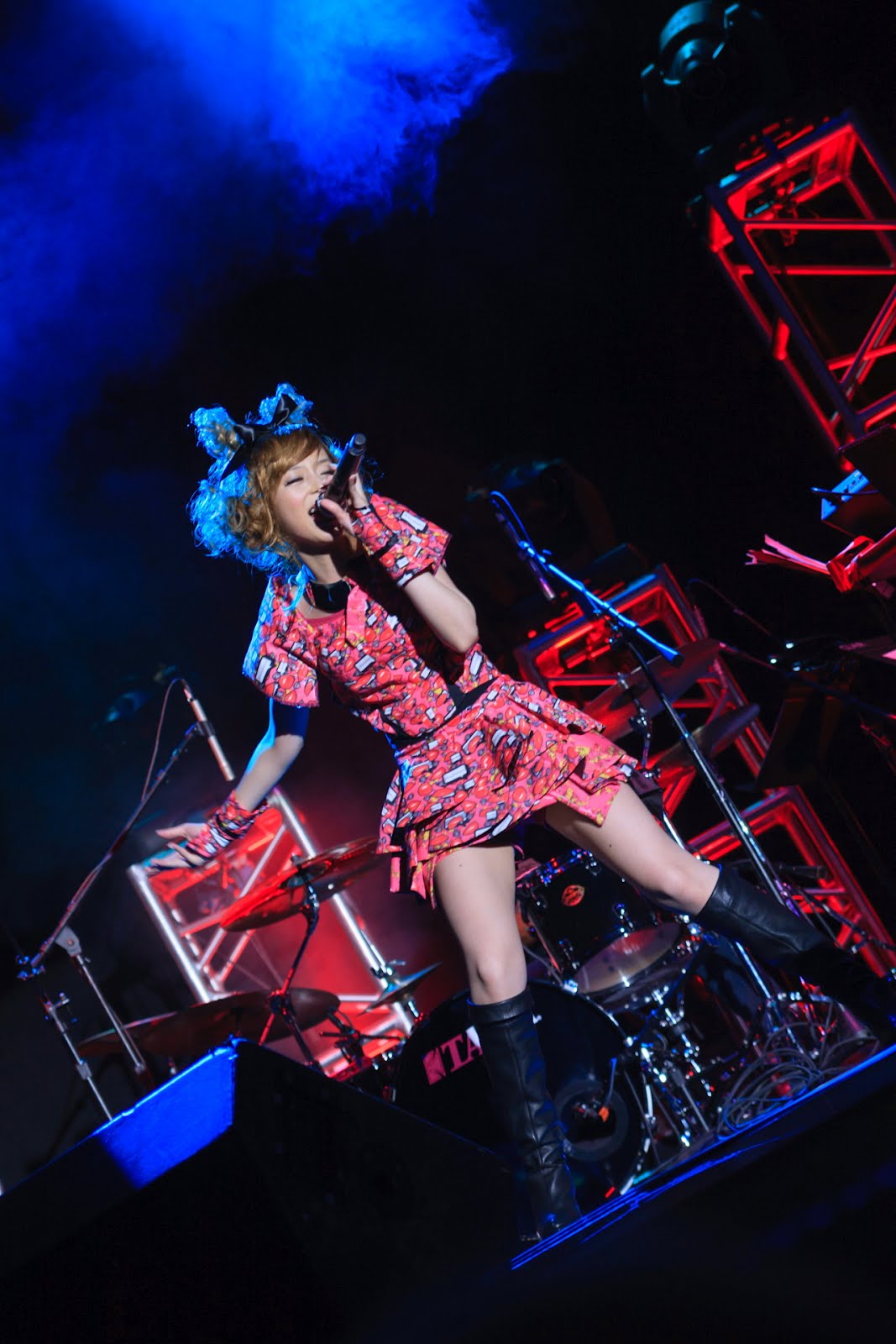 As Aya Hirano finished “Super Driver,” the stage went dark, the band departed, and the concert ended. Or did it? Aya Hirano’s fans at Otakon cheered for an encore for almost five minutes before Aya Hirano and her band obliged, singing “Bouken Desho Desho?”, the opening theme to the first season of Haruhi Suzumiya. This wasn’t just an ordinary performance of “Bouken Desho Desho?”, as Aya Hirano called out to the audience, holding out her microphone for the audience to sing along with the harmony. The last song of the concert, “MonStAR,” was a piece from her early album Riot Girl. 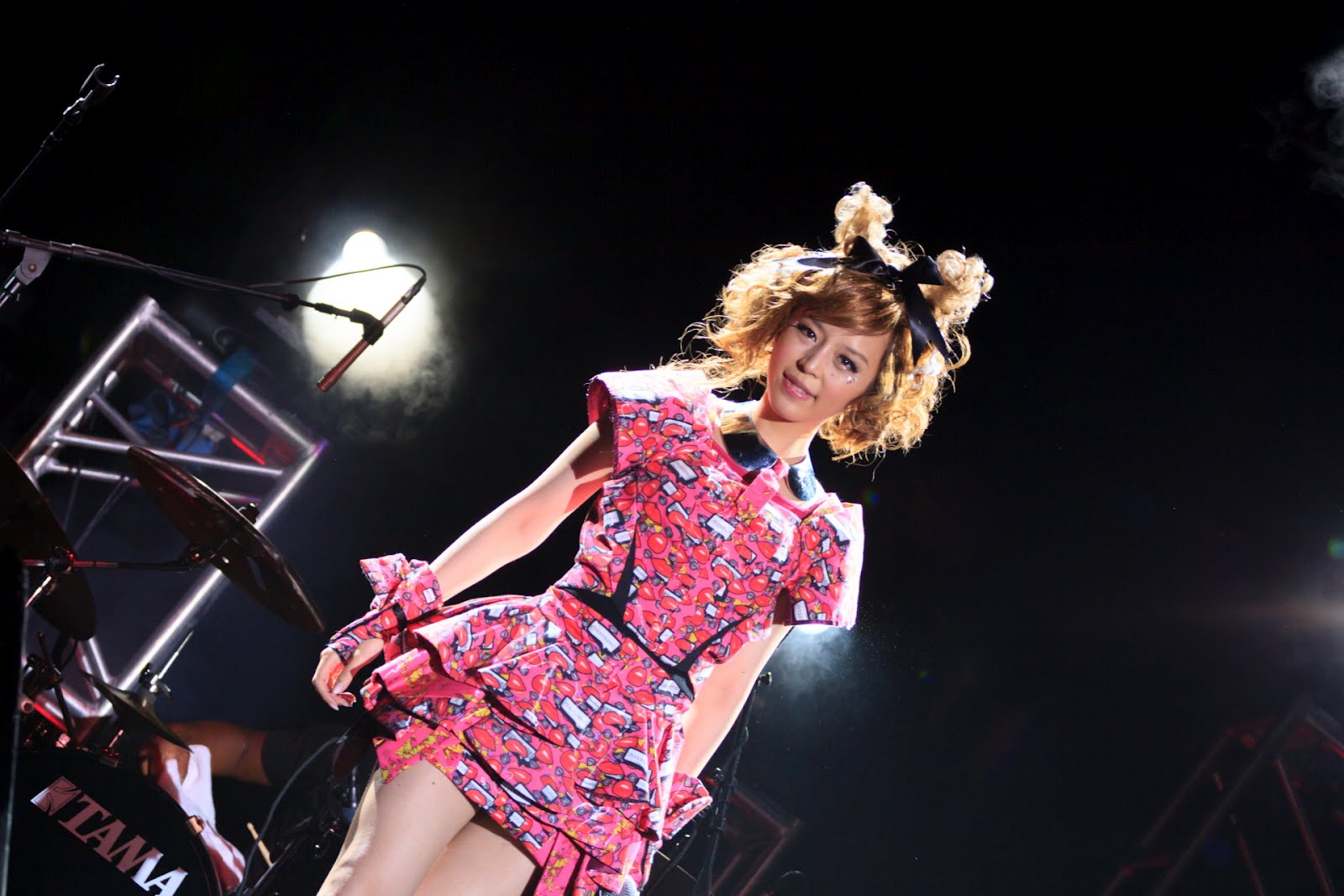 The concert was immediately followed by an autograph session. A line that stretched the entire way around the perimeter of the room rapidly formed. While I didn’t have time to stay for Aya Hirano’s autograph session, I heard that she stayed for more than two hours after the end of her concert to make sure that everyone who made it into the line got an autograph. Bravo, Otakon and Aya Hirano, for making many Hirano fans’ dreams come true: a live concert, an autograph, and a memory that will last a lifetime. 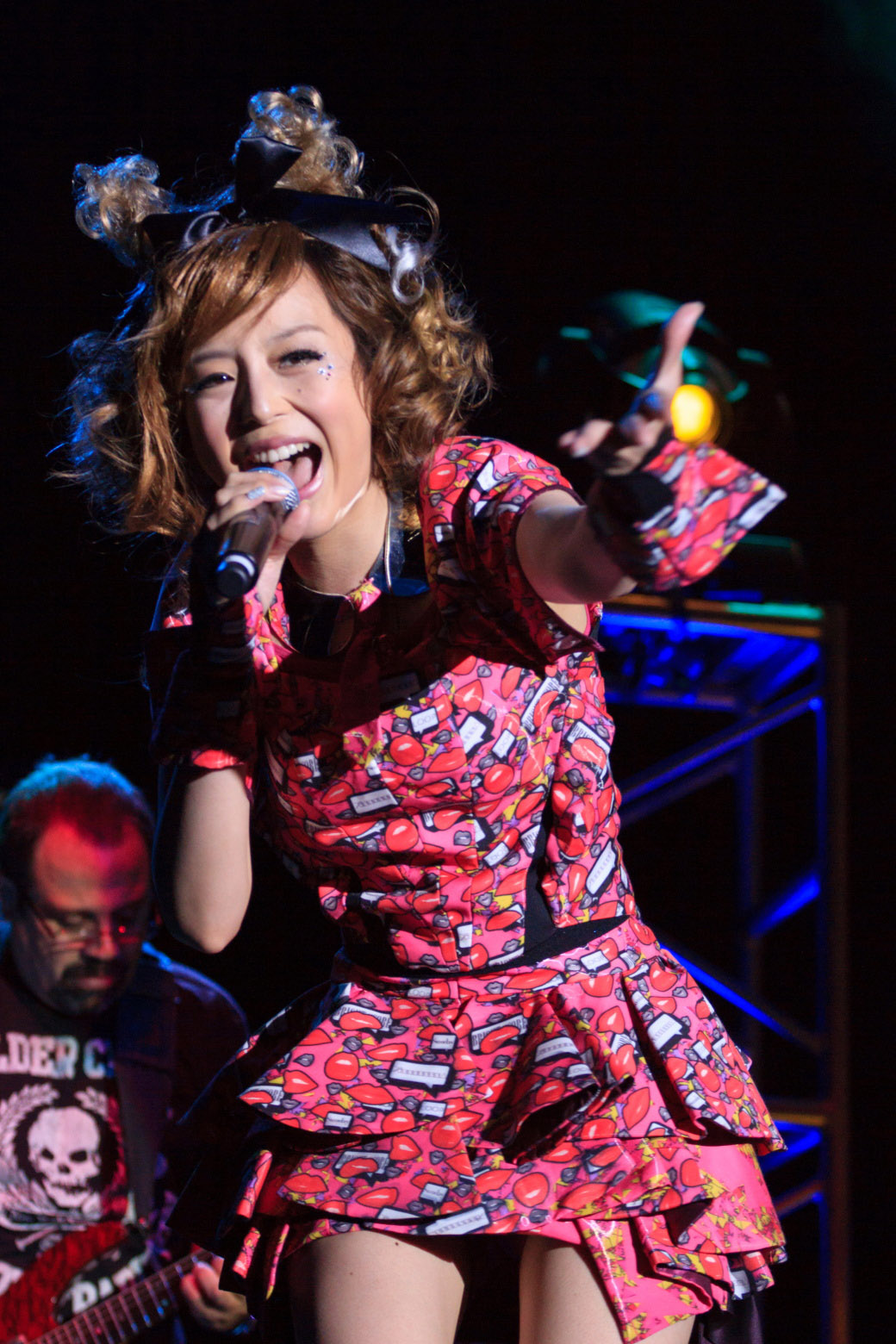 Diffusion (To the Other Side)
Unnamed World
Bright Score

MC04 and End of Concert