Imagine, of all places, finding a huge picture of Ayanami Rei in a site I read that normally has nothing to do with anime–Getreligion.org, which comments on religious coverage in the media (from a conservative point of view mostly).

And it gets even more interesting. The Getreligion writer is commenting and criticizing a theological imprecision in an article about Japanese group suicide in The Atlantic Monthly (here is the article; as for the imprecision, suicide is not the unforgivable sin against the Holy Spirit, per se)–another publication that normally doesn’t talk about anime–and apparently in there, the Atlantic writer David Samuels interviews none other than Hideaki Anno, the director of Neon Genesis Evangelion: the show that got me into anime in the first place. Anno is notoriously reclusive and it’s quite a coup, I think, to see him talking to the mainstream American media, and so frankly too. This is how the Samuels describes him:

In person, Hideaki Anno, dressed in a military-green jumpsuit and black boots, slouches deep in his battered office couch and glowers. In a country where conformity is still a virtue, Anno stands out on account of his curly black hair and large, cauliflower-shaped ears, which, in combination with his jumpsuit, give him the appearance of an angry hobbit in black-rimmed glasses. 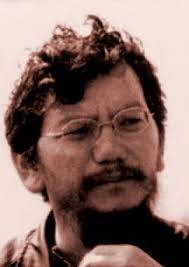 Hah. He makes him sound like Peter Jackson. But not as cheerful. This is Anno talking about his most popular character:

I am particularly interested in talking to Anno about the character of Rei, a depressive, suicidal girl whose big eyes, girlish body, and blank expression have been the model for the central female characters in Japanese anime for the past decade.

‘Rei is someone who is aware of the fact that even if she dies, there’ll be another to replace her, so she doesn’t value her life very highly,’ Anno explains, slouching ever-deeper into the couch. ‘Her presence, her existence—ostensible existence—is ephemeral. She’s a very sad girl. She only has the barest minimum of what she needs to have. She’s damaged in some way; she hurts herself. She doesn’t need friends.’

About Japanese society, he says (partly quoted in the Getreligion post):

Anno understands the Japanese national attraction to characters like Rei as the product of a stunted imaginative landscape born of Japan’s defeat in the Second World War. “Japan lost the war to the Americans,” he explains, seeming interested in his own words for the first time during our interview. “Since that time, the education we received is not one that creates adults. Even for us, people in their 40s, and for the generation older than me, in their 50s and 60s, there’s no reasonable model of what an adult should be like.” The theory that Japan’s defeat stripped the country of its independence and led to the creation of a nation of permanent children, weaklings forced to live under the protection of the American Big Daddy, is widely shared by artists and intellectuals in Japan. It is also a staple of popular cartoons, many of which feature a well-meaning government that turns out to be a facade concealing sinister and more powerful forces.

Anno pauses for a moment, and gives a dark-browed stare out the window. “I don’t see any adults here in Japan,” he says, with a shrug. “The fact that you see salarymen reading manga and pornography on the trains and being unafraid, unashamed or anything, is something you wouldn’t have seen 30 years ago, with people who grew up under a different system of government. They would have been far too embarrassed to open a book of cartoons or dirty pictures on a train. But that’s what we have now in Japan. We are a country of children.”

Interesting. I remember reading similar comments from him in his interviews with various high school kids when he was researching Kare Kano, and this dependent, self-pitying, escapist attitude is one he was actively trying to battle with the conclusion of Eva. He wanted otaku to wake up from their illusions and embrace the real world, though I’m surprised the man who recently directed the remake of Cutie Honey, and is now busy remaking Evangelion, would go so far as to call any adult who reads manga childish. (Though I wonder, given how different Anno is now, how different the new Eva will be. Will it be as depressive as the original?) It should be noted, though, that Hayao Miyazaki–Anno’s mentor–has said similar sorts of things too. In fact, if anything, Miyazaki is even more pessimistic.

Samuels gets a lot right about Anno and Eva, but, in my opinion, there are still some inaccuracies in his article, inaccuracies repeated by the Getreligion writer. Rei is not exactly suicidal, per se, though she does view her life as cheap, as Anno points out. While Shinji accurately rehearses a lot of the mindset of a depressed young man, I don’t think Eva plays a big role in the increasing popularity of group suicide in Japan; you’d have to find shows like Welcome to the NHK that address it far more directly and probably more accurately. I do find it interesting that he thinks Eva is the most significant pop culture product in Japan in the last two decades, though I wonder how true it is that it is what really spawned the whole otaku subculture, as the author says; I was under the impression that though Rei still shows up character popularity polls and is still routinely parodied, like in Haruhi Suzumiya, Evangelion for the most part has passed its prime and otaku have moved on. (Which is why Anno is trying to revive it!)

Anyways, it’s a rare thing for this amount of new and original information to show up in mainstream outlets about our favorite hobby, and worth commenting on. Even if my first anime hero, Anno, thinks we are all children. 🙂