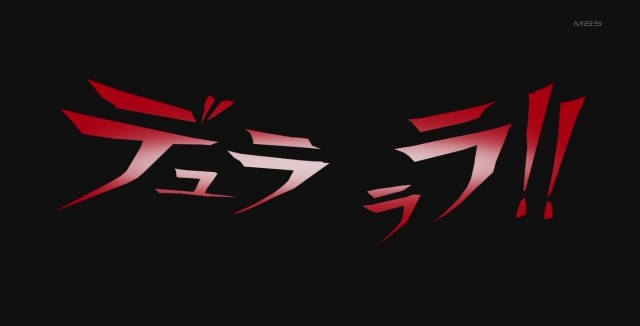 I dare not say that I find a gem every season, let alone across two seasons. However, I think I’ve found a gem. Well, to be fair, everyone’s called it. But DRRR has really surprised me with its turns, twists, set up and humor. As readers of this site know, I don’t avoid spoilers because as someone who’s not good at writing this stuff, I have to incorporate them as I express and explain my thoughts. So if you haven’t seen Durarara 16 and/or 17 or if you didn’t finish the first half of the series, you may want to wait until later to read this.

At first, I thought the show was simply using the Durahan legend and placing it in a Japanese setting, which is quite common. You have K-On in Europe Sora no Woto that takes European elements and interpret them in a Japanese context. There’s Gintama that mixes up modern day technology, space drama (sort of) and old Japan. There are some other examples of that. Or actually, to be fair, most anime places a Japanese protagonist into a foreign environment. After all, the intended audience has never seen the world and anime serves as a gateway for it. That’s why the artistic background for different places in anime is often great. In any event, having watched too many anime, I didn’t have any expectation for it. Of course, I didn’t watch Baccano beforehand, so I knew very little about the creators and the staff.

I honestly thought I’d be just as confused as when I watched episode one of Baccano – ok yeah, now I remember. I did watch episode one. Or rather, it wasn’t confuse that gripped me, but a lack of ability to keep track of multiple characters. The jump in settings didn’t help much, either.

With DRRR, I never had any trouble distinguishing people apart. All the characters are vibrant, interesting. Each individual has his or her own motive and each motive somehow gets interweaven into the greater scheme of things. Sure, there are things that don’t seem too relevant to the big plot thread, which is that one thread which runs through season one or what I call, first half. Having Mikado as the unseen leader and founder of Dollarz and yet a well-seen but low-key protagonist is simply genius. It’s plausible, too, in today’s world, that some random teenager ends up creating or rather, igniting a subculture in a huge metropolitan city by a simple, discreet act. That, I did not expect at all. But it all made sense and maybe I’m just liking the show too much, but I let it pass in the plausibility category. After all, stranger things have happened on the internet.

But that’s only one plot thread. It’s a huge one that connects all these seemingly unrelated personalities together. But it gets even more complicated than that.