JAM Project, one of the biggest anisong “supergroups” in the industry, was founded in order to further the genre of anime songs specifically. Consisting of a number of veteran anisong singers, today it now comprises founding members Masaaki Endoh and Hironobu Kageyama, as well as Masami Okui, Hiroshi Kitadani, and Yoshiki Fukuyama, who all joined between 2002-2003. They are best known for songs for shounen action shows such as Cardfight Vanguard, Nobunaga the Fool, GARO, and New Getter Robo, as well as video games like Super Robot Wars. Their operatic rock seems to fit those genres especially well.

Unfortunately, the audio for our transcript recording was sometimes fuzzy so not all attributions were 100% clear. Apologies for lack of clarity on those questions and answers.

We started by asking Masaaki Endoh about his famous predilection for bringing instant noodles with him on tour.

Endoh-san, what kind of instant noodle did you bring this time?

Masaaki Endoh: Six different flavors of mini-sized ramen! But I don’t have a water boiler due to luggage weight limits, and unlike in Japan, they don’t have hot water dispensers in every room.

Your stagecraft and style of music is very theatrical and almost operatic.  Is that a reflection of the sort of anime that you do music form or is that your natural style?

Hironobu Kageyama: Actually it is influenced by the type of anime the songs are for. So if it’s anime that has robots, like Super Robot Taisen where there’s a lot of fighting and energy, the songs will be influenced by that.

How do you think your style has adjusted over the past 15 years?

Kageyama: We don’t so much change our style as look for something new to do.

So would you ever do a song for a moe anime?

Kageyama: If someone ever asked us to, sure. We have girls in the band. [looks at Masami Okui] But we don’t ever get asked to do that sort of thing…

How do you relax when you’re off jam project? Individually? Or collectively?

Kageyama:We always like to talk together sometimes. Outside of music…well, we always thought about making our own jam. Jam Project jam!

What flavor of jam?

What secret hobbies or hidden talents do you have?

Kageyama: I’m the oldest, so working out is my hobby. Recently I’ve been cycling and scuba diving. And this year, I’m challenging myself to train for a short distance triathlon.
Hiroshi Kitadani: The fans on twitter probably already know this, but my hobby is cooking. I do it every day, and when I make my own dish and drink alcohol, it’s very relaxing and therapeutic.

Kitadani: Oden! It’s easy to make.
Masami Okui: As for [my hobbies], in Japan or all over the world, I like to visit “power spots”–places with spiritual energy. In Japan, that would be shrines or temples I love. When I’m off work, I go there a lot. This year, though, I want to go to Mt. Shasta.
Yoshiki Fukuyama: I have no hobby. So my hobby now is to look for a hobby.
Endoh: I love animals, so I have a lot of pets. It’s a dream that I want to be surrounded by animals in a big place.

Kageyama-san, you said last year at Anime Boston that you started the band when anisongs were in decline . Do you think the anisong industry has revived since then? Where do you see it going?

Kageyama: Anime songs are much more popular popular in Japan compared to 10 years ago. There are a lot of live events and concerts now and the audience has increased a lot. And variety of artists have shown up. So, it has changed a lot over the course of 10 years.

Who is the first musical artist that grabbed your heart?

You’re all at Las Vegas now, do you plan to gamble and do you feel lucky?

Okui: Living is a gamble.
Kageyama: I don’t feel the urge to gamble. But if I was, I’ll pull a slot machine handle once.
Kitadani: It’s a little scary, but I would like to try roulette.  Try betting on black. Ehh, really but what about red? You can split it 50/50, like your hair! [Laughter–ED: Kitadani had colored half his hair red, as in the picture at the bottom.]
Fukuyama: I never tried gambling, but I have seen it a lot in movies, so I like to try it like they do it in the movies.
Endoh: I like hitting the jackpot.

You’ve done a lot of songs for sentai series. What are your sentai colors?

The interview was conducted by Jeremy Booth with additional questions by Michael Huang. Rome Yamashita, Raymond Hu, and Linda Yau translated from the audio for this transcript. 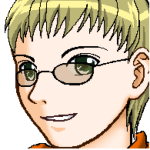 Jeremy lives in the Redondo Beach area. He was first introduced to anime with heavily edited versions of Mazinger Z (aka Tranzor Z in the US), GoLion (aka Voltron) and Macross (aka Robotech) while growing up in the 1980’s. Since then his tastes have evolved into a fairly eclectic mix of anime with a soft-spot for underdog shonen stories, psychological/cyber-punk stories and select love comedies.

Jeremy is also the head organizer of Anime Souffle anime club. It was at an Anime Souffle meeting where he met Michael Huang and eventually was invited to join as a guest co-host for Scattered Cells Podcast episode #6 in February of 2007. He since then has become a regular part of the Anime Diet crew.