Instead of another regular post, detailing either a classic show, or even an attempt to fashion a bridge between disparate generations of anime lovers, I thought I’d share this short piece of memory film in celebration of the end of one singularly bizarre decade. It was definitely a ride, and now as we dart rapidly into the holiday season it only felt right to share a little about material goodies, and what happens when your hobby takes unusual turns in history…

Ever get one of those so-uber otaku goodies that would do well to be left unseen by certain family members, only to be brought out the moment you hear their cars putter beyond the proximity of your domicile?

As some may know, I spent some time working for a relatively popular manga/anime distro during the latter years of the 2000s anime bubble, and have plenty of things worth remembering about the whole experience. Being surrounded by fellow geeks with similar ethics was a time most remembered as one rife with possibility, but of humbling revelation. You know, there are times when it wasn’t the easiest keeping a straight face in the eyes of bulling forward with business-as-usual. Did I enjoy my time there? Well, quite possibly, it was the time of my life, working for an outfit like this and seeing things from the inside, surrounded by a small cadre of some of the coolest hearts & minds I’ve ever known. But since my business largely consisted of working with the merhandise end of the spectrum, there were moments which gave me pause about the very state of the industry. As exciting as things were at times, there were moments of alarm upon seeing items that would land in our warehouse, ready for us to ship out either stateside, or sometimes internationally. And this is what I hope to impart to you today. Many of us all know exactly what is out there, even in the world of cutbacks, and dwindling sales, we still have a growing mass of items while eyebrow raising, make for less-than-flattering home decor when mom comes visiting.

Among the more standout items that landed via sometimes tattered cardboard boxes, covered in chinese text would include not merely character figures, but often art books, apparel, and at times even items that would defy proper description had it not been for the occasional accidental click into the weirder echelons of eBay or J-list.

Because you see, there is kind of a distance we apply to the tangible when we see it on a monitor while perusing from the comfort of our homes. It is another thing entirely when we actually take it out of a box, and touch the item in question. Suddenly, the item becomes real, and the realization hits you that these things actually adorn many homes and therefore have made many customers happy. So upon working there, the disconnect was in constant danger of reaching full flow status, so it became quite the fun thing to await the latest shipments. Just about every other week, it was as if we were in December once again, as I took point in being the guy to break out the cutter and peek at the new swag upon it landing.

Now by the time winter came along, it was just standard practice to recieve the packages and to open them, count, take out, organize, and so on. But upon one morning, we recieved a much larger shipment than normal that came with one long box that was curiously heavier than the others. And that part of me that has had his fair share of running into packaging that was more like advertising materials. More often than not, this tended to be the case, so I nonchalantly shriffed that aside to dig into the more standard boxes of art books & character figures the crew and I had been accustomed to..

You know,…from young female action heroine in animated pose, wearing one of many specially designed outfits. Whether it be the latest Saber figure, or perhaps even the winter clothing version of an Evangelion character. Heck, even at this point I had already become more than familiar with the Summer Edition figures that have been fan favorites for years. It wasn’t uncommon to have late orders come in for the Swimsuit version in the dead of winter.

And even as I put everything into their respective shelves, there was a nagging reminder at the back of my mind to take a peek at the heavy box, I left aside a little earlier. Even asking a few of my higher ups as to what else we had planned to recieve that day, I found out that this box was not on any sort of expected list. So naturally, I waited for a moment when others weren’t regarding this heavy, slightly elongated box and proceeded to cut lightly along the top edges of the box and open it. It wasn’t until this moment that I realized that maybe this wasn’t some kind of promo signage after all. Ads and the occasional foam & plastic that worked to protect sales merchandise were in abundance. So when I lifted the material and looked at the white, colored-on material that lay in the box, the only thing I could think of was how different something like this seems when one looks at it online. The disconnect wore off instantaneously.

As much as I wanted to shrug it all off and say that yes, we have carried stuff as obliquely silly before, there was a shade of two feelings running through me at that moment;

a) This was some kind of a shipper’s mistake.

b) This was a VERY special order from an American fan.

I could assume other things, but for the life of me, none of us on the crew seemed to care one bit about Kore Ga Goshujinsama, so that eliminated any additional suspicion!

And this continued on with the Kanu figure with near-nonexistent seifuku, Rin removing her top, those really iffy Queen’s Blade game books, that meido figure with spilt milk all over her…um…nevermind…

So this is what it all comes down to for me. As much as the decade brought about equal parts a maturity of form and equal parts endless pit of Akiba Kei pander carnival. The ride has certainly taken some surreal turns over the last ten years. And while it hasn’t all been sakura blossoms, or to my taste for that matter, the anime 2000s can be looked back as a sort of incubation period for where the medium could decide on where it could go without merely pleasing a few niche audiences. But as for the expressions beyond the 2D, one has to wonder if the core of early “otakudom” (IE-Communing with others about similar likes and passions.) has truly allowed itself to nestle in for temporary creature comforts as opposed to forging real relationships based on similar tastes/thoughts. Of course, many other factors play into this, but if a bed sheet is where one must go to appreciate their love of a character (in this case, a fourteen year-old in a skimpy maid outfit..), I’d say it’s high time to shut down, and start meeting up with some pals for some ocha-tinged hang time.

I mean, it isn’t like we all have some item that continues to make us question our very interests, let alone our-

So I impart this to you, dear reader. What is the most unusual/potentially embarrassing anime item you own? Just curious.

As for the sheets? Months passed, and it remains a mystery to this day. I wonder where they are now. 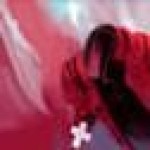